Leer libros The Ugly Duckling by Riley Weber. Featuring over 40 dazzling modern illustrations!  An original illustration on every page, making it easy for children to understand, follow, and enjoy!  Based on the classic story by Hans Christian Anderson. Adapted and illustrated by… 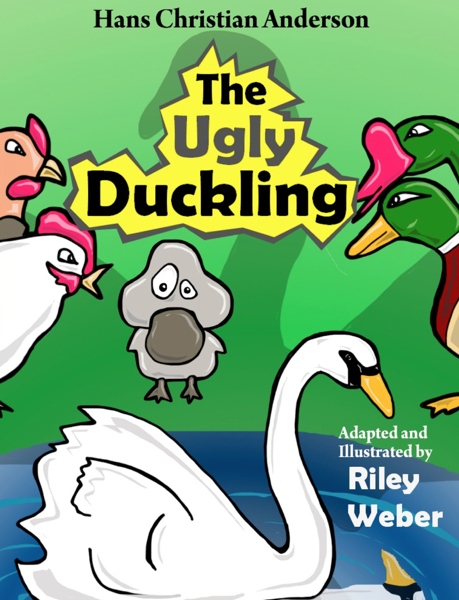 Featuring over 40 dazzling modern illustrations!  An original illustration on every page, making it easy for children to understand, follow, and enjoy!  Based on the classic story by Hans Christian Anderson. Adapted and illustrated by Riley Weber.   Born into a place where he didn’t quite belong, the ugly duckling tried to fit in. He swam with the other ducks but they made fun of him because he was big and ugly. After a time of being teased, bitten, and pushed by the other poultry, the ugly duckling decided to fly away.  The ugly duckling flew and flew until he landed in an area that was inhabited by wild ducks. There, the ugly duckling got caught in a firestorm of bullets, as hunters began shooting the wild ducks as they flew up in the air. The scared little ugly duckling covered himself up with a wing when a large sporting dog approached. Even the sporting dog passed by the ugly duckling.  The ugly duckling suffered many hardships including storms, a harsh winter, and just trying to survive. It wasn’t until the following spring that the ugly duckling, while laying out in a meadow enjoying himself, saw a group of swans. He decided to fly with them. As he got near them, he lowered his head not knowing what the swans would do. It was then that he noticed his reflection in the water of a beautiful swan! He was no longer an ugly duckling!  He now felt glad to have suffered sorrow and trouble, because it enabled him to enjoy so much better all the pleasure and happiness around him. For the great swans swam round the new-comer, and stroked his neck with their beaks, as a welcome.  Everyone was happy that the new swan had come. Little children threw bread and cake into the water for the swans to eat. The children thought the new swan was the most beautiful of all; he was so young and pretty. The swan didn’t quite know what to do. He had been teased and despised for his ugliness, and now he heard them say that he was the most beautiful of all the birds. He rustled his feathers, curved his slender neck, and cried joyfully, from the depths of his heart, ‘I never dreamed of such happiness as this, while I was an ugly duckling.’